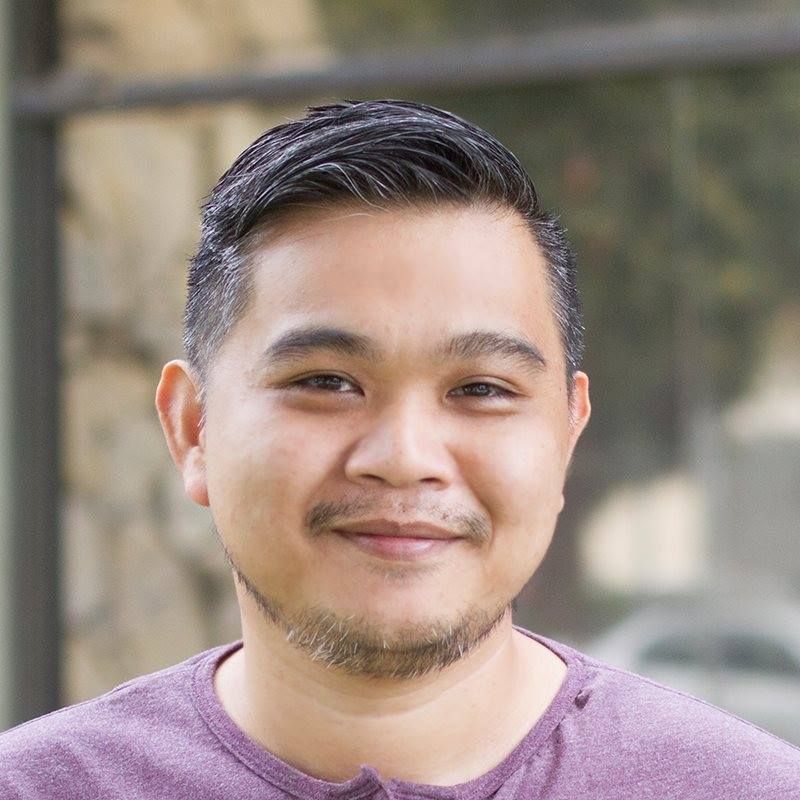 In my almost 20 years in the workforce, all of the companies I've worked for have work arrangements that are, in one way or another, broken.

there is absolutely no reason for knowledge workers to continue working within huge, continuous blocks of time per day

First of all, the 8-hour work-day is a relic of the industrial revolution – it was a compromise born out of a time when the bourgeoisie's exploitation of the proletariat was at an all time high and everybody was working 16-hour work days and 6-day work weeks. "Eight hour labor, eight hours recreation, eight hours rest!" was the battle cry for the campaign that ultimately led to the adoption of the 8-hour work day.

Since the introduction of the 8-hour work day, there have been tectonic shifts in the industries we work in and, save for certain roles (i.e. security guards or employees in retail and hospitality), there is absolutely no reason for knowledge workers to continue working within huge, continuous blocks of time per day. This is doubly true for knowledge workers who should be paid for their output as opposed to for the time they spend working. Additionally, very rarely do knowledge workers even need to be in the office to be productive.

Work arrangements that needlessly measure employee productivity against the number of hours they keep their seats warm are nothing more than control mechanisms underpinned by distrust. They are straightforward albeit misguided ways to assure the business that they are getting something in return for paying salaries--their employee's time.

There is no dearth of alternative work arrangement frameworks out there. The benefits of systematically reducing the time employees are required to work have been well touted and publicized. For instance, Microsoft claims that shortening their work week to 4-days led to a 40% boost in productivity in one of their subsidiaries in Japan. Sweden has been experimenting with shorter work days and Finland's Prime Minister has suggested similar compressed work days or work weeks.

if we put the proven productivity gains compressed work weeks or work days can result into at the forefront or our decision, it makes absolutely no sense not to do it.

The problem, I think, is that companies see the choice between trying out an alternative work arrangement already proven successful and sticking with the status quo as a binary one. It's either a 4-day work week works for us or it doesn't. It's either we implement it as prescribed or we don't.

In reality, if we put the proven productivity gains compressed work weeks or work days can result into at the forefront or our decision, it makes absolutely no sense not to do it. The question then becomes how do we take one of the established frameworks and make it our own?

Making it our own: 4-hour compressed work days

For instance, Growth Rocket, being a full-funnel digital marketing agency with a workforce primarily based in the Philippines and a client base based almost exclusively in the United States; a four-day work week arrangement simply wouldn't work for us. The shared workflow between our team and our clients is too dynamic in the sense that we need to huddle up daily to tweak our campaign strategy in response to performance data or client-side changes. We attempted to do these huddles remotely in the past but found it to be less efficient than being able to meet in-person daily.

Additionally, the timezone difference between the Philippines and the United States is already challenging as is. People who manage accounts work on a schedule that overlaps the tail-end of business hours in Pacific Standard Time which means that they aren't required work nights and this is something that I am not going to compromise on. That overlap period with our clients is valuable and reducing it further by compressing the work week is  problematic.

To test this, we kicked off a pilot for a compressed four-hour work day to see what sort of impact it would have on our operations and the quality of our output.

The changes we made to our time keeping policy are straightforward

So what we've effectively done was remove the arbitrary limitations on when and where people can work.

Looking at data from the pilot period vs. a comparable period, team members actually worked more as measured by an increase in overall productive time. We define productive time as work rendered towards activities related to a person's specialization excluding meetings and management and governance-related tasks.

Result: Team members logged work within a wider range of time throughout the day

During the pilot we noticed that team members logged work within a wider range of time throughout the day. Prior to the pilot, nobody logged work earlier than 6:00am and later than 8:00pm. That window widened to almost a full 24 hours within the pilot. 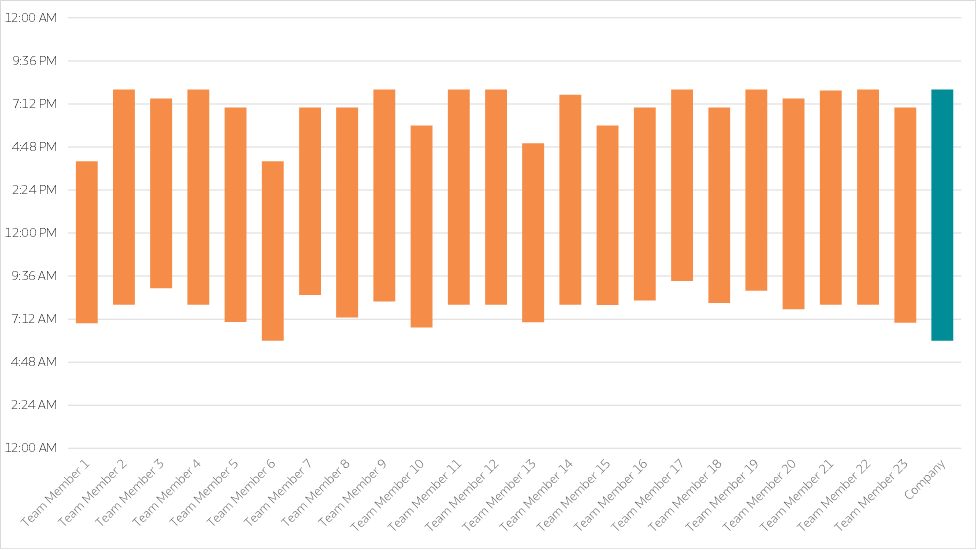 In the comparison period, the company's range was limited to a window between 6:00am and 8:00pm 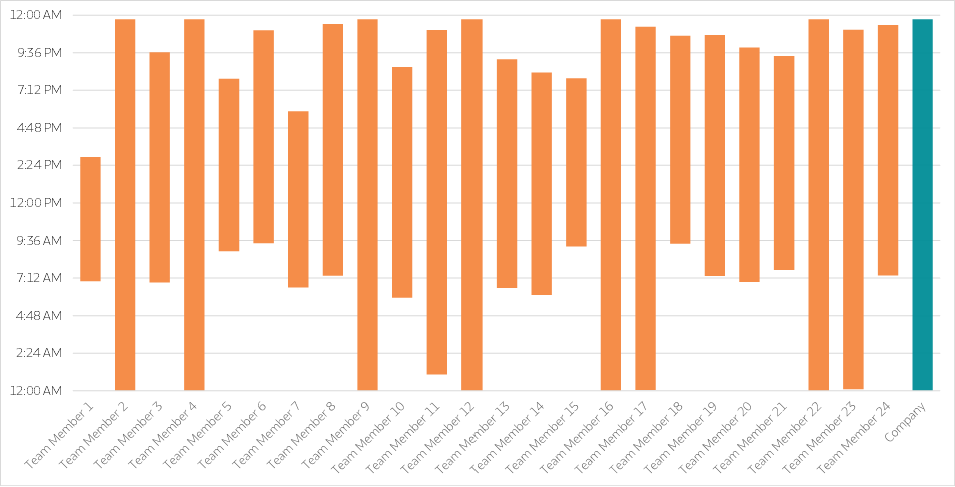 During the pilot, the window widened to almost 24-hours

People have different preferences when it comes to when, where and how they do their best work.

In regards to "when", it has been proven that doing highly focused work for short periods of time with breaks in between is better than being partially focused for long periods of time--something a work arrangement with a policy that requires you to work long, continuous blocks of time shoehorns you into.

Allowing team members to log time whenever they feel the most inspired, rested or likely to get into a state of flow manifests as gains in the quality of their output and their overall job satisfaction. You can't get these gains by forcing people to work under circumstances that aren't personally conducive for high-level ouput.

As far as the "where" would go, similar to needing to be able to "Time Shift" themselves, they also need to be able to "Place Shift." People's preferences when it comes to where they get their best creative work done vary wildly. Within Growth Rocket, for instance, while majority of the company already logs a meaningful number of hours of work outside of the office, there are team members who still prefer to work in the office full time.

Jason Fried, CEO and Co-Founder of Basecamp (a tool we use heavily within Growth Rocket) was a guest at HubSpot's The Growth Show Podcast where he mentioned:

"when you ask people where they go if they REALLY want to get shit done, very few people say 'the office'"

In the end, it's all about empowering team members by giving them a choice. The choice of whether they want to work in the office or elsewhere and the choice of when they can work to produce at their best.

Result: a sense of better of work-life balance

Growth Rocket asks all team members to accomplish a team member pulse survey every quarter. Looking at responses to questions relevant to the measurement of how happy team members are about how the company promotes work-life balance, we saw a 17% lift between the surveys conducted after the pilot concluded and before it was implemented.

The questions relevant to this measure are: 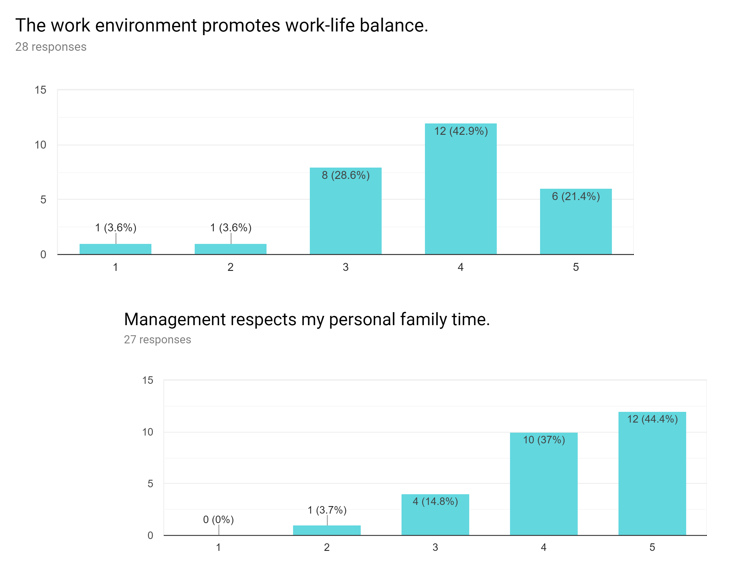 Prior to the implementation of the pilot, the average score on work-life balance related questions on the pulse survey was 3.78. 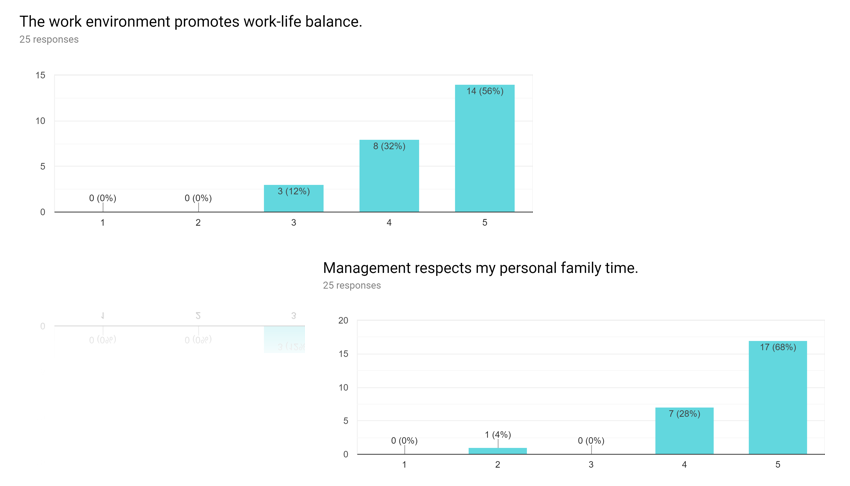 Answers to work-life balance related questions on the team member pulse survey during the pilot improved to 4.44-- a 17.53% improvement.

While I am happy with the results we've seen so far and I have proceeded to integrate the pilot as a codified company policy, I am also cognizant of the fact that this is merely the beginning of our perpetual pursuit of the perfect work arrangement for the modern knowledge worker.

Ultimately, I would want to be in a position where we can safely remove all guard rails and transcend as an organization that can run exclusively on outcomes and everyone exhibits levels of accountability that the organization wouldn't even need policies on time keeping and attendance.

Patty McCord writes that Netflix didn't start off without any rules like they do today, they got to where they are by slowly removing rules.

I know we'll get there.

← Superstar employees Are we ready to let go of our offices after the pandemic? →